Wylie, ninth and 10th fastest in Friday’s practice sessions, suffered a disastrous qualifying at the Kent track on Saturday when his front right tyre deflated suddenly on his first flying lap sending the Scotsman off into the gravel trap and out of the only session to set grid positions for today’s two races. The massive set-back, caused by a faulty tyre valve, meant Ross started both races form 21st and last position but the Dumfries driver was in dazzling form for this morning’s Race 1 staged on a damp track. 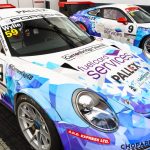 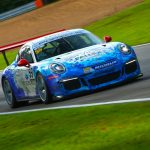 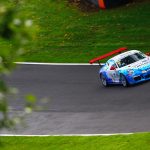 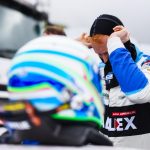 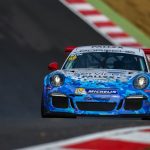 The former British GT4 Champion made up a staggering eight places on the opening lap and lay 10th by mid-distance, a position Wylie held to the chequered flag in his 911. Ross was again in impressive form in Race 2 around the 2.43-mile Grand Prix track, slicing his way up to 11th overall – third in class – in the 17-lap race. Wylie’s next scheduled race is the next round of the Britcar Championship at Oulton Park on 21 October. Ross and co-driver Witt Gamski head to the Cheshire track aiming to successfully defend their nine-point series lead in the MJC Furlonger Ferrari 458 GTE.

“It was a decent end to my first Porsche season with another top-10 overall finish and then just missing out on another. The one-make series was not only new to me but also a new venture for the SlideSports team. It’s therefore been a steep learning curve for both of us in what is an extremely competitive series featuring drivers and teams that have contested the series for a number of years. Qualifying was obviously a complete disaster when the tyre suddenly deflated but Race 1, on ‘old’ tyres, was good fun in the damp conditions while 10th was the best we could have hoped for starting from the back. I was again able to make up places in the second race.

“Highlight of the [Porsche] season for me was finishing as the best-placed Porsche GB Rookie and 13th place overall on my Le Mans début. Low points were the opening race at Brands in April when I was shunted off the track at the first corner. The considerable damage meant I also missed Race 2 there and in many respects put SlideSports and myself on the back foot for the season ahead. Being hit into retirement leaving the grid at the start of Race 2 in my ‘home’ race at Knockhill in August was also massively disappointing.”

This site uses Akismet to reduce spam. Learn how your comment data is processed.